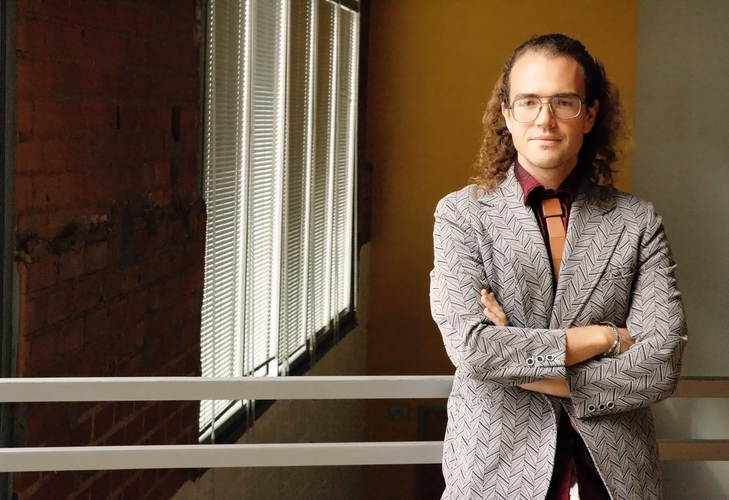 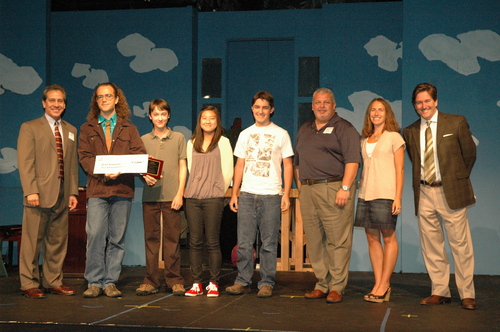 Levi Simons, who teaches upper school advanced math and physics, was named one of 100 "Unsung Heroes" by ING, an international financial services institution. The honor comes with a $2,000 grant that Levi will use to fund "The TIGER Project" with his Division Three students.

ING representatives Art Perez and Mark Ortega formally presented the award at the All School Meeting on Monday, Oct. 18. Joining Levi on stage to receive the honor were 9th graders Owen L. and Noa P., and 10th grader Paul N., who each gave a brief explanation of their research that the grant money is funding. Head of School Landis Green and Director of Upper School Leigh Fitzgerald were also on hand to welcome the ING guests and congratulate Levi and his student team.

"ING has awarded more than $4 million to more than 1,500 educators in the last 15 years," Art Perez told the audience, "Levi and other winners are selected for their innovative teaching methods, their creative approach, and their willingness to go above and beyond to improve student learning."

Levi, who joined Wildwood’s upper school faculty this year, was chosen from more than 1,400 applicants from across the country. His project TIGER stands for Technologically Integrated Geotagged Environmental Research.

"Students will be checking the environmental conditions in their own city, and looking at those conditions over time to compile public data," Levi explains.

The project has four themes: air and water quality, drawing meaningful conclusions from data, the social impact of environmental quality, and the economic motivators behind current and potential environmental conditions. "This merges social science and physical science," says Levi.

Owen L. is leading the water quality project, which involves studying pollutants in the Ballona wetlands in Marina del Rey. Paul N. and Anders G. are pairing up on a project to measure radiation using hand-held Geiger counters and Android cell phones. Noa P. is measuring harmful gasses to determine their impact on cardiovascular health. Each of the projects are being executed in partnership with different schools across the state.

Students are using netbooks, digital camcorders, and Wiki software that is being purchased with the ING grant. Levi sees these tools as fundamental equipment that can be used by "citizen scientists." In fact, the concept of the "citizen scientist" is a growing movement—and Levi is a passionate supporter. He envisions projects in which researchers at all levels, from high school to grad school, can do field work with little more than a cell phone to contribute to ever-expanding bodies of knowledge.

"It’s about creating a central lab, then farming out the research to local citizens and creating 'volunteer effort science,'" he explains.

Levi has recruited two citizen scientists from Division Three, Charlie S. and Steven W., to work with him on a project at Caltech that involves finding compounds that will split into hydrogen and oxygen when placed in water. Another student, Paul N., is working with Levi on a radiation mapping project through Crashspace, which describes itself as "a collection of hackers, programmers, builders, makers, artists, and people who generally like to break things and see what new things we can build with the pieces."

This active, hands-on approach to science is in keeping with Levi’s firm belief that "the most effective way to learn is through the apprenticeship model." "There’s no reason why you can’t get meaningful scientific data from 14-year-olds," he says. "Science is about hard work and endurance. It doesn’t matter what age you are."